The Ambers got off to a great Isthmian Premier League Start with a win at home 3-0 against Essex side East Thurrock United.

The season opener started with the home side getting a press on early and dominating the early exchanges. Ken Charles hit the post with a carefully guided shot across the keeper after only 2 minutes, Arthur Janata  the Rocks captain gratefully grabbed the rebound. The match settled into a tit for tat midfield exchange until Joe Re selected the perfect pass for Theo Osafolarin running in from the right to pick up inside the box & take in his stride to slide past Janata.  Aileru provided most of the Rocks most promising moments, but was carefully marshalled by Ambers fullback Chevron McLean making his competitive debut.
With half time approaching Reece Beckles Richards cut in from the Cheshunt left, and identified a gap to curl an exquisite shot beyond Janata’s left post into the corner. 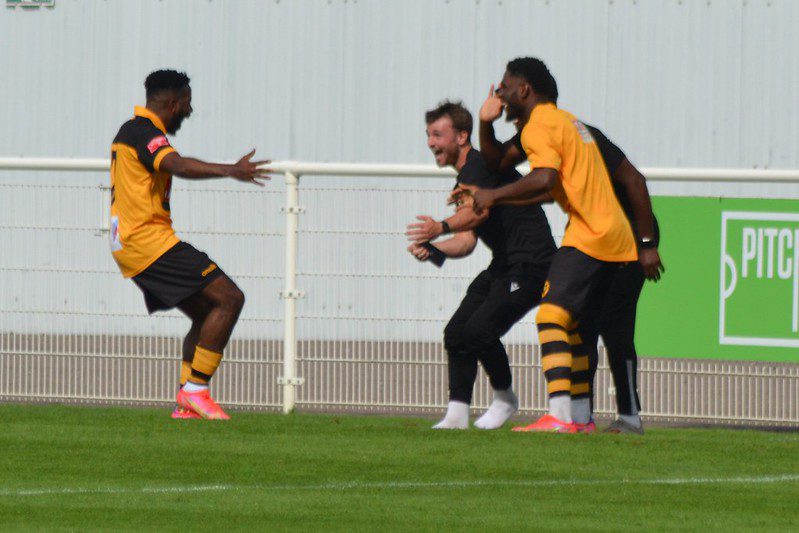 The second half saw Cheshunt continue to dominate, and could have added to score, the back line marshalled well by Tom Gardiner didnt look like conceded, while the same player saw Janata pull off a point blank save from a Cheshunt corner.
Predatory striker Ken Charles finally got his reward when man of the match Joe Re , put him clean through with another clinical channel pass, cooly converted for 3-0.
Cheshunt comfortably saw the game out with substitutions closing down any East Thurrock threat.