A biting wind running the length of the pitch made this match a bit of a battle, both sets of players did well to adjust,  especially centre halves under demanding swirling long balls, making last minute compensation to remain in contention. The opening quarter had both sides feeling each other out, Cheshunt players more familiar with their colleagues than Leatherhead settled first and slick passing opened up the Tanners defence for Reece Beckles Richards to get shots away that keeper Adam Desbois was equal to, a full length dive then tipped a Taylor Miles shot around the post, and in the closing minutes of the half a fine double save saw Desbois parry a Joe re shot, then tip clear the Rowan Liburd follow up header . 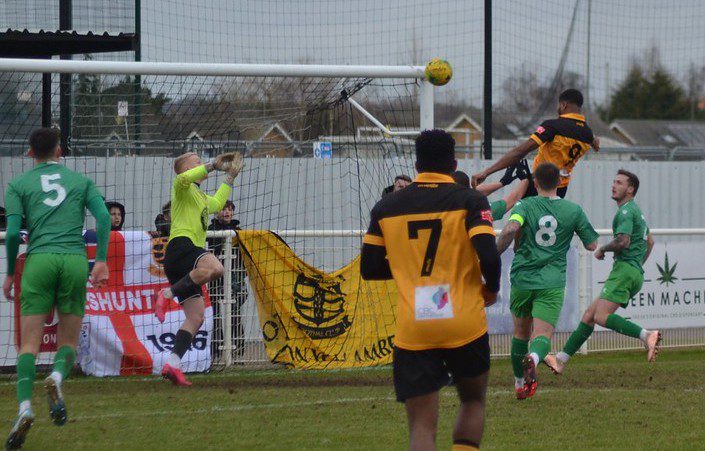 Playing into the wind second half Cheshunt got pinned in their own half early on and the game became a midfield grind and occasional half chance. It came to life on seventy minutes when Ambers keeper George Marsh pulled off an acrobatic double save to keep Jake Embery off the scoresheet. His display inspired team mates & minutes later a clipped ball to the Leatherhead far post was met by fullback Daniel Ojo on the volley from an impossibly tight angle to score what proved to be the winner.
Leatherhead pushed hard & Marsh kept the Ambers’ nose in front clawing  a goal bound header away  from behind his left shoulder, then displaying incredible reactions in tipping an Antonio German shot over the bar from point blank range. 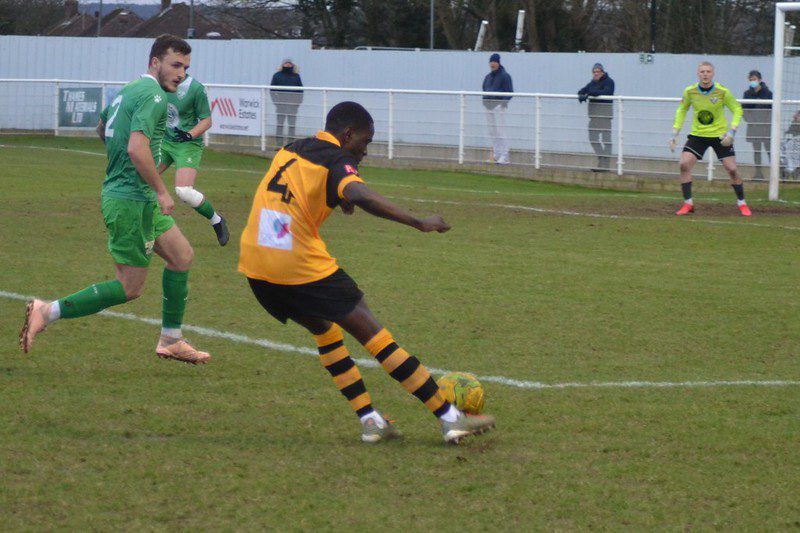 Cheshunt had more possession throughout the match, the industry and running from Taylor Miles & Enock Ekongo in midfield relentless, enabling the home side to continue creating chances, the best in the last quarter falling to substitute Zack Newton when Rowan Liburd turned a pass ‘around the corner’ into his path, alas his deft chip taken early on the run didn’t quite clear Desbois & the Ambers were left  to organise, cover, and work hard in the latter stages to retain their lead to the full time whistle by a completely new look Leatherhead side pushing for an equaliser whilst still in its formative period after appointing  new manager Luke Tuffs mid season to try & escape relegation.

Three welcome points for the Ambers, their first league win of 2022, a good test for Adam Crowther’s ankle, with no reaction, on his return to league action, but striker Rowan Liburd’s late substitution with concern over a hamstring,  is a major worry with Cheshunt’s biggest match in years only a week away.