The Non League Paper match report of the Cheshunt-Lewes match ending 2-2 at Theobalds Lane, exactly as it di at the Dripping Pan earlier in the season.

Two teams going for the win to secure a play off spot had to settle for a share of the points in a pulsating match that had a little of everything.  The visitors started well with some slick passing football and caught Cheshunt napping early on with two chances.  A succession of cheap free kicks kept Lewes on the front foot until Kenneth Yao picked up yellow for a late challenge on Mo Camara, from the free kick Cheshunt had their first corner and looked an aerial threat, Tom Carlse under pressure from the long throw pushed in the box & Reece Beckles Richards despatched the resultant penalty. The home side looked to be going to the break one up until Joe Taylor struck, his first muscling his way goal side to pass a shot across Edwards, then adding to his tally from the penalty spot after Adam Crowther pulled down the dangerous Deshane Dalling 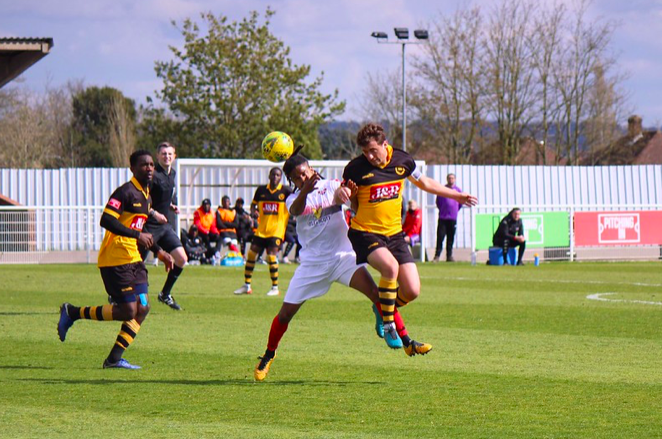 The second half saw Cheshunt take the game to Lewes, Joe Re breaking the line and squaring to Kayne Diedrick Roberts who mis-kicked with the goal at his mercy. On the hour mark good passing on the left saw Beckles Richards put clear & Kenneth Yao took his second yellow and subsequent red pulling him down. The Ambers squandered numerous chances, and bought on top scorer Rowan Liburd, to partner Mo Camara up front, his influence paid dividends laying the ball back to Camara who struck a low left foot drive into the bottom left corner.  Lewes re organised with ten men and worked very hard to cover, Cheshunt had the ascendancy and the introduction of Nick Dib gave them a degree of control. Cheshunt forced corners & had chances in the last quarter to take all the points, but Rooks keeper Lewis Carey marshalled his defence well & with Folkestone also drawing 2-2 there is no change in the scramble for the last play off place this week.