Background information on the history of Hampton & Richmond Borough FC 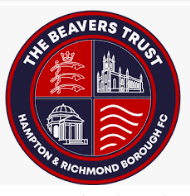 Hampton FC were formed in 1921 (changing their name to Hampton & Richmond Borough FC in 1999). The club are the only Senior Football Team in the London Borough of Richmond-upon-Thames, an area dominated by Rugby Clubs. Hampton’s early years were spent in Junior Football competing in the Kingston & District and the South West Middlesex Leagues until 1959 (Hampton’s main honours during that period were four KDFL Championships between 1929 and 1933). Having secured a lease on Beveree, Hampton made the move into Senior Football, joining the Surrey Senior League.

The Beavers (no one can quite recall how or why the club acquired its nickname!) won the Surrey Senior League Championship in 1964 and were then invited to join the Spartan League (there was no progression though a pyramid in those days). Hampton won three Spartan League and Cup doubles during their stay in the Spartan League. In October 1967 Hampton made their best ever signing when they persuaded Alan Simpson OBE to take the role of Club President (Mr Simpson, in partnership with Ray Galton wrote comedy classics, Hancock Half Hour and Steptoe & Son). Alan Simpson OBE would remain Club President for 50 years until his death in 2017, his funeral was held on the Beveree pitch.

The Club’s first floodlights were installed in 1967 and after a short stay in the Athenian League, joined the Isthmian League in 1973. The Beavers played in various divisions, at one stage sinking down to Division 3 before a surge up the league saw them gain a place in the Premier Division in 1998. At the end of the 2002/03 season the Beavers were relegated but shortly after the signing of Alan Devonshire (ex-England & West Ham United) as Manager saw a resurgence in fortune which saw them gain the Isthmian League Championship in 2007. The Beavers would spend five seasons in the Football Conference South, twice narrowly missing out on promotion to the apex of Non-League, losing two play-off finals in 2008 and 2009.

The Beavers found themselves back in the Isthmian League for the start of the 2012/13 season, a season after Alan Devonshire had moved on. The following two seasons saw disappointing finishes of 13 and 12th, one month into season 2014/15 joint managers Paul Barry and Darren Powell resigned and ex-Kingstonian Manager, Alan Dowson, was appointed.

The Club have over the years improved Beveree to a state where it now has a ground capacity of 3,500 (including 750 seats) without losing the ‘country’ and ‘village’ feel of the place and has a reputation as a welcoming and friendly club. The club has its own Football Academy as well as a large youth set up.  The Club remain fully committed to the local community having been part of life in Hampton Village for a century.