Ben Hajdu takes on the difficult task reporting a heavy defeat at home for the Ambers, Pictures : ScottLear 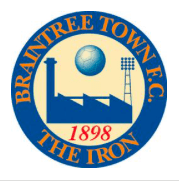 Braintree started the match extremely well, scoring three within the first fifteen minutes. Their first goal coming from a mistake at the back from Cheshunt allowing former Amber loan Aaron Blair to nip in at the near post to flick a low cross from the Braintree left inside the near post at a tight angle. The second goal came from the penalty spot. The penalty was controversially awarded for a hand ball from by Raul Da Silva when goalscorer Aaron Blair flicked a back heel up onto the defenders arm at short range, the referee reacted to the Braintree calls and awarded the penalty with an apparent lack of appreciation for the circumstances. Alfie Matthews stepped up, put it left and sent George Marsh the wrong way. The third goal came on 15 minutes after another error gave Braintree possession back in the last third, 3 passes & a low crossed ball across the box for striker Lemar Reynolds to finish off from close range. this effectively killed the game, after scoring three goals to start the game Braintree very much controlled the rest of the first half and Cheshunt did not look very dangerous at all, failing to convert a lot of hard work into realistic chances to get back in the match.

At half time Craig Edwards replaced Annointed Chukwa with Rowan Liburd and the half was much more positive for Cheshunt. They started the second half with Brandon Adams narrowly missing a header from a Dajon Golding Cross early on, then seeing a lot of the ball forcing a number of corners and taking shots from outside the box. Alas Cheshunt were caught on the break and conceded a fourth. Braintree ran the ball down the left, cut it back and it was a simple finish for Alfie Payne.

Reece Beckles Richards and Zack Newton both came on around the 65th minute and increased the tempo of Cheshunt’s attack. However it wasn’t enough as substitute Ben Fowkes brought the ball under control on the Braintree left hand side, ran at a defence that backed off, then cut inside and fired the ball goal bound from just outside the area, a shot to nothing that went straight into the middle of the goal at head height, appearing to wrong foot the keeper.   Braintree’s midfield were much more proactive and deserved the win,  A tough loss for Cheshunt a heavy defeat not experienced in recent times, work to do before losing becomes a habit.