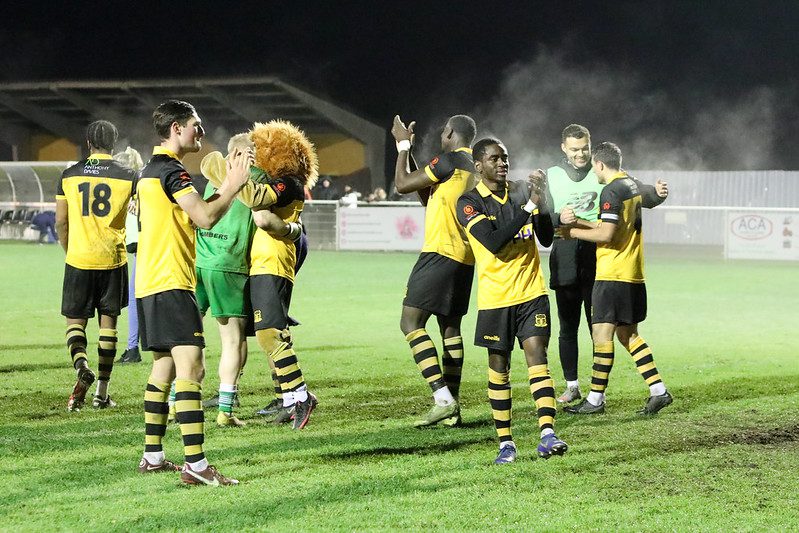 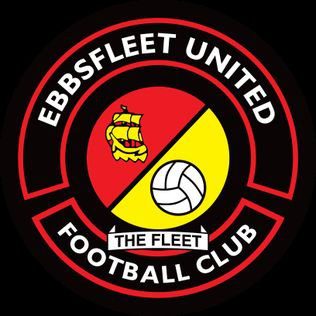 The Ambers retained the starting line up that despatched Dover Athletic before the snow, with the bench seeing the return of Taylor Mackenzie & former Ebbsfleet keeper Preston Edwards.   The visitors made two changes from the team beaten at home by Eastbourne at the week end,  Top scorer Dominic Poleon returned along with Sido Jombati.

The Ambers got a flying start courtesy of the visitors defence when keeper Mark Cousins came a long way to clear a through ball, and his defence in trying to play out got pressed & turned over in the final third.  Rowan Liburd’s low shot from 20 yards was pushed out by Cousins, who did well to race across his goal. But it fell for Zack Newton, who was barged by Joe Martin as he shielded the ball , back to goal on the six yard line. The referee pointed to the penalty spot, Beckles-Richards slotted home the spot-kick to give Cheshunt a eigth-minute lead. Martin received yellow for the foul & Cousins joined him after overdoing his protestations.

Cheshunt left-back Isaac Pitblado was solid in his encounters with Fleet wide man Omari Sterling-James, and tackled early to keep attacks on the Fleet right to a minimum. One such challenge did attract the referee’s attention and a card, but Ebbsfleet failed to capitalise on the free kick planting it firmly into Ambers keeper Adam Desbois’ arms. Pitblado did very well to manage 70 minutes on a card and maintain his vigilant patrol the the Cheshunt left.

Ebbsfleet looked like a top of the table side as their slick passing & intelligent movement bought them plenty of possession, but they failed to trouble Desbois as he marshalled his defence superbly to run Ebbsfleet attacks into crowded areas & eventual hopeful attempts easily cleared. The visitors did claim for a penalty as a shot deflected to the arm of Lewis Hobbs, both referee & linesman deciding it was very much ball to hand & moving in a direction out of the area, not into it. Indeed it was the Ambers who might have doubled their lead had Beckles Richards got clear on the half way line as he wriggled like an eel to nearly catch the visitors out on the stroke of half-time. Christian N’Guessan was perhaps fortunate to only be booked for fouling Beckles-Richards as he looked to break clear from inside his own half with no one except the keeper left to beat.

Ebbsfleet continued their sound build up play, but once forced into traffic with channels blocked didn’t really have a plan B. With the exception of Craig Tanner’s deflected shot shaving the outside of his left post, Desbois looked set to record his third clean sheet on the spin.  Chris Harris returned from injury to replace Rowan Liburd to keep the visiting centre halves busy, while the pace & movement of Newton & Beckles Richards clearly ensured the vistors couldn’t commit too many bodies forward without there being a cost. Ebbsfleet made substitutions to try & open up the Ambers defence, manager Craig Edwards countered bringing on Ernie Haxhiu & Enock Ekongo, fresh legs to close down any creation in midfield. Fleet substitute Franklin Domi had a shot blocked in the Ambers area & was then called into action at the other end to clear off the line from Raul Fernandes Da Silva.  In the dying moments Fleet top scorer Dominic  Poleon dragged a left-foot shot wide of the far post, and Cheshunt managed the six minutes added without further opportunity for the league leaders.

(Teams available on the Line Up tab)

A collection for Broxbourne Foodbank was made at this match & the Supporters , Players & Staff of Ebbsfleet & Cheshunt made a fantastic contribution to a very worthwhile operation. Happy Christmas & Best Wishes  for 2023 to everyone!