Cheshunt FC made history winning promotion to the Vanarama National League South, the highest level the club has ever played at in it's seventy five year existence. a heroic 2-1 win over FA Trophy holders Hornchurch, at Bridge Avenue secured the second promotion place for Craig Edwards men. Cheshunt rounded off their 75th Anniversary season by securing a position in the Vanarama National League South via the play off final versus Hornchurch on Bank Holiday Monday. Having finished 5th in the Isthmian League, their highest  ever, making the last sixteen of the FA Trophy, and winning the Herts FA Senior Challenge Cup for the first time, to win promotion via the play offs was the icing on the Ambers cake.

Having despatched Hertfordshire rivals Bishop’s Stortford 3-2 in the semi final, they met current FA Trophy holders Hornchurch at Bridge Avenue, a tough match at anytime, but a final and in front of a capacity 2035 full house it may have seemed a daunting task, however a quick look at the ‘Away’ League table would show Cheshunt top of the table, and in those away performances a very technical, strategically planned tactical 1-0 win over their hosts.

The Ambers approached the match in a positive mindset, a pre match training session on the Saturday had worked on attacking & defensive positioning specific to the match, Manager Craig Edwards having done his homework and reached out into his network of football minds for the latest information. The warm up saw the Ambers in a relaxed mood, their drills done with a smile on their face, the Rondos generating laughter & banter.  The Hornchurch warm ups appeared almost the opposite, very regimented & quiet, each player knowing what was expected and concentrating fully.

The match kicked off with both sets of supporters squeezed in and baying their encouragement, the Cheshunt Drum & Amber the Lion orchestrating the away supporters.  Cheshunt appeared to have settled into their rhythm the quicker, neither side giving quarter in some bruising challenges, Amadou Kassarate, chief collector of yellow cards this season being first into the book, quickly followed by Ronnie Winn for Hornchurch. The home side had their hands full with the Ambers fielding Mo Camara and Rowan Liburd in the same team, it was the latter who had the first real opportunity when he rolled his marker & ran onto a ball in the inside right channel, the Hornchurch keeper did well to stand up long enough with his angles covering both posts & Liburd’s shot rattled the stanchion supporting the side netting. Winn was fortunate not to pick up another card for a challenge on Joe Re & Hornchurch manager Stimson was quick to recognise with less than a quarter of the match gone he couldn’t leave a liability charging about the pitch, however with probably the best left back in the premier league to call upon in Remi Sutton the Hornchurch team balance was maintained & even enhanced. Alas for the Urchins Joe Re dusted himself down & delivered the perfect free kick into the Hornchurch back post where Amadou Kassarate lost his marker & rose majestically to head the ball back across the former Ambers keeper Joe Wright, and into the corner of the Hornchurch net to send the Amber fans wild.

Hornchurch were stung into action & Joe Christou picked out Tobi Joseph in the box, but after chesting the ball down his shot was deflected into the arms of Preston Edwards as Taylor McKenzie blocked his way to goal. Edwards was called into action again to put a dominant punch in to clear a Hornchurch corner, then a dive low to his left turned a shot around the post. At the other end Joe Wright emulated  the low dive save to turn a trademark Jamie Reynolds low shot from the edge of the box around the post, and then had to be alert as an early Enoch Ekongo cross turned his defence allowing Liburd a header on goal, saved with good positioning.  Wright was beaten when another free kick conceded on the right side was curled into the same far post area as the goal came from, this time Adam Crowther rose highest, heading the ball back across goal, Taylor McKenzie met the ball and was ready to celebrate until a red shirted defender managed to stretch out, to hook the ball off the line.

Hornchurch equalised on 35 minutes when Muldoon found Liam Nash on the right and he created the room  to cross low into the box, Tobi Joseph’s initial shot was blocked but the ball broke for Joe Christou lurking on the edge of the area to shoot into the roof of the net.  The home crowd would have settled for going into half time all square, but with a minute to go to the break Zack Newton broke the Hornchurch lines and dribbled into the box on the right hand side, trailing two defenders with him, they got close enough to challenge but took him down in the process, the referee was well positioned & had no hesitation in pointing to the spot. Leading goalscorer Rowan Liburd took responsibility, but hats off to Joe Wright , he had done his homework & despite being well struck, Liburd put it in the same place as the Stortford penalty the week earlier, Wright dived right & parried the ball to safety.

The second half saw both sides win corners, but defences soak up the pressure & clear their lines, Long throws from Newton for Cheshunt & Christou for Hornchurch offered additional threat.  Hayles put a shot into the side netting for Hornchurch after good work from Nash, & Clark blasted over, snatching at an opportunity. Mo Camara for Cheshunt was winning headers and even throwing in an occasional extravagant flick, for Liburd to pick up, the work put in by the front men ensured the Hornchurch back line were not allowed to join attacks & when they did, they were shut down quickly.

Just beyond the hour mark , Chevron McLean broke up a Hornchurch attack and                   ( Hornchurch fans take note) played a pass inside to Amadou Kassarate, looking up he found Newton on the half way line, back to goal, Newton stroked a pass to Joe Re & immediately rolled into a run down the left, Re returned the pass first time (still all on the deck)  With the Hornchurch midfield by passed with slick one touch football, Newton was free to run at Parcell, the full back, shown inside and unable to play a forward pass because of the defensive line staying high, he drifted across the front of the box, feinting & looking for an opening as successive Hornchurch defenders sought to block a path to goal,  with the bench, the crowd & half his team mates screaming shoot, Newton let fly a shot that appeared just wide and just high until the last moment when it dipped under the bar & inside the post giving a full stretch Joe Wright no chance. The home crowd were stunned, the Ambers bench ecstatic.

Hornchurch made further changes to inject fresh legs and ideas, eventually sacrificing a full back to chase the game. Ambers Manager Craig Edwards warmed his subs up at regular intervals but with his side looking capable of repelling Hornchurch attacks he was very conscious of changing the balance or the substitute needing time to adjust to the pace of the game. Jamie Reynolds buzzed around the central areas hassling and harrying Hornchurch into desperate passes, instead of incisive moves, and when the ball moved, he moved with it to hassle the next man, the home side must have thought there were two of him out there. As the time ticked away, Hornchurch became more desperate, their attacks more ragged, and mostly broken down before opportunities arose, when the opportunities did come the Ambers defence stood firm, Twice in time added on the ball fizzed low across the six yard box, but with no one available to turn it in.  Enock Ekongo patrolled the Cheshunt right in front of a hostile crowd like he owned their pitch, appearing half way inside the Hornchurch half supporting a Cheshunt raid,  then seconds later it was the same player blocking a Hornchurch cross at the Cheshunt bye line. Adam Crowther won everything Hornchurch put in the air despite sporting a shiner manager Edwards would have been proud of in a former career, Crowther included a goal line clearance in his repertoire, when Hayles headed goalward from a Muldoon corner. Kassarate & McKenzie on yellow cards from the first half timed every tackle to perfection & left back McLean was thoroughly enjoying his tackles and runs forward to relieve pressure on the Ambers territory. The Cheshunt front line played their part in the closing stages running the clock down , Camara the rock to aim for, Liburd & Newton tying Hornchurch up in the corners.

With five minutes additional time played, cue Ambermonium ( as the Isthmian League described it)  Players dropped to their knees, Manager & Coaches danced exotic jigs in elation, substitutes & squad ran on to congratulate team mates, closely followed by the Ambers fans, there were smiles, hand shakes, tears & hugs all round.

Commiserations to Hornchurch who had an excellent season,  Congratulations to the Cheshunt squad, management & coaches, to recover from the appalling run of one point from fifteen at the turn of the year and be sixteen points off a play off spot, it was a great finish that just gathered momentum from a long way out. Step two is going to be new to the club, what a wonderful opportunity to look forward to,  and plan for, during the summer. 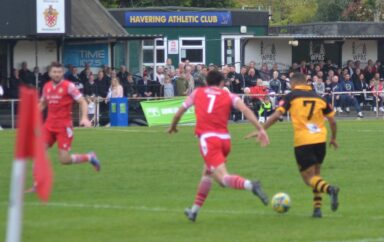 The Goal That Won Promotion 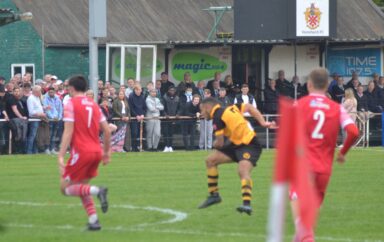