A lively but cagey opening saw Cheshunt slowly start to dominate their visitors, the home defence, the tightest in the league snuffed out any opposition movement before the final third, Enock Ekongo making several excellent tackles to clear lines, and Adam Crowther dominant in the air. Taylor McKenzie had his hands full with the experienced Dylan Kearney, but marshalled him well. The home side were forced into a change when Ambers midfield maestro Taylor Miles was stretchered off with a knee injury, but his replacement Sam Alderson quickly picked up the tempo. Reece Beckles Richards opened the game up with a quick fire double on the half hour, Jamie Reynolds set him clear of a high line defence for his first, striking a shot into the roof of the net on the run,

then two minutes later repeating the run, this time dropping a shoulder & placing a shot low to the left of advancing keeper Ben Goode, having been put clean through by the vision of substitute Sam Alderson. 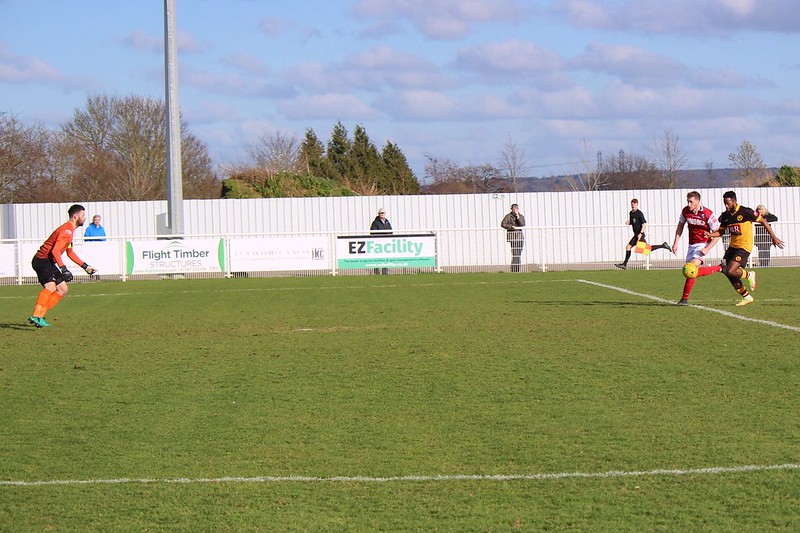 Beckles Richards continued to be a thorn in the visitors side looking for his hat trick first with a long distance attempt just over the bar, then a back header from close range cleared off the line.
The second half saw Wingate & Finchley in the ascendency for the opening twenty, forcing Cheshunt keeper Preston Edwards into two very good punched clearances, and some organisation of his defence at set pieces. His best, a diving clearance from a Freddie Hinds volley tipped away for a corner.

Cheshunt introduced pace in Kayne Diedrick Roberts & Zack Newton wide, and this pinned Wingate back for the final quarter, The home side seeing the game out comfortably when in the last minutes home skipper Joe Re chested a loose ball down on the edge of the area & drilled it on the half volley through a crowd into the far corner to seal the match.